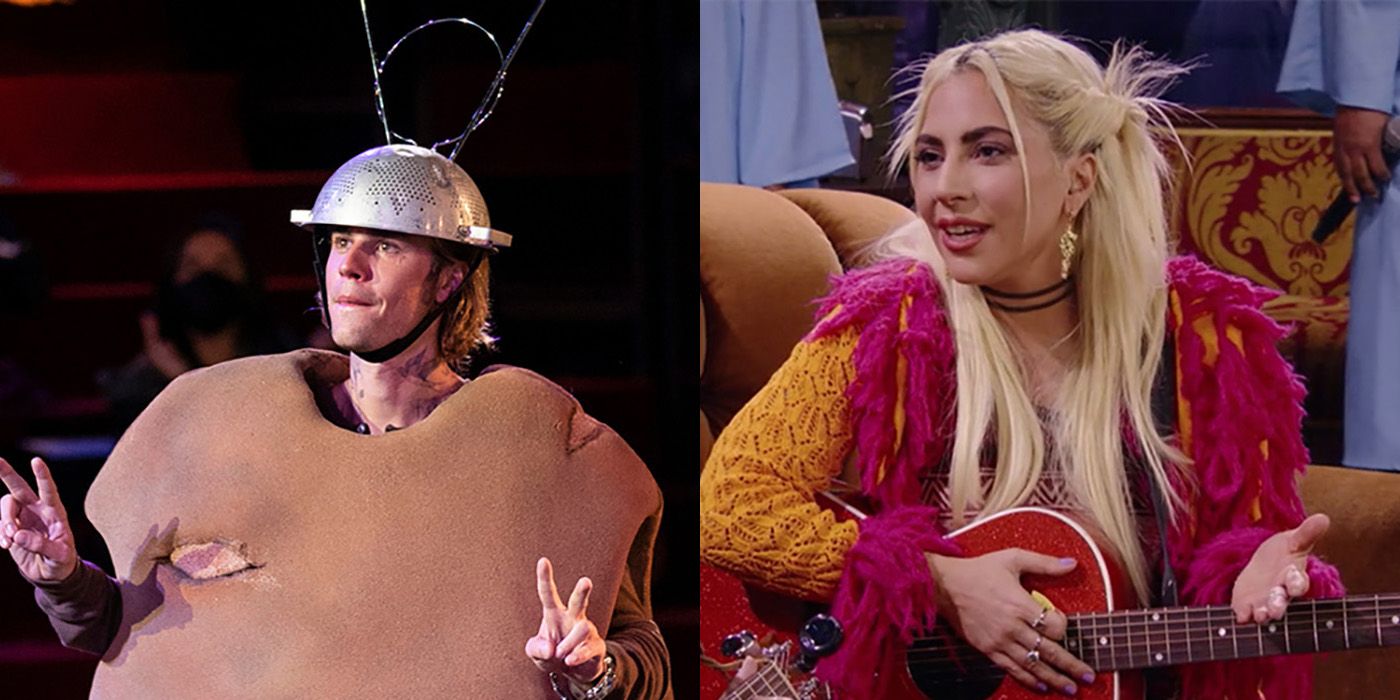 Fans of the iconic ’90s sitcom Friends had been anxiously awaiting the Friends: The Reunion special (official name Friends: The One Where They Got Back Together), which had to be delayed due to COVID-19, but it finally aired on HBO Max and, for many, it was totally worth the wait.

Not only did the special bring all six main cast members together in the same room for the first time in 17 years, it also welcomed a long list of celebrity cameos.

RELATED: Friends: 5 Season One Episodes To Watch Before The Reunion (& 5 To Skip)

Many high-profile celebrities delivered pre-recorded segments discussing their love of the show and favorite scenes, like Kit Harington, Malala Yousafzai, BTS, David Beckham, Mindy Kaling, and Reese Witherspoon, who actually played Rachel’s younger sister Jill. But the true cameos came with the celebrities who showed up in person.

Technically, James Michael Tyler, best known for playing Central Perk waiter Gunther on the show, did not appear in person. However, though he was unable to be there, he did appear on a big screen via virtual meeting.

Wearing a Central Perk baseball cap, Tyler discussed how everyone was wonderful on the show and his time on there playing the long-time waiter who not-so-subtly pined for Rachel (Jennifer Aniston), were some of the best years of his life. Indeed, the character lives on through tons of Gunther memes that are all over the Internet.

Thomas Lennon has become known for his roles on Reno 911!, The Odd Couple, Night at the Museum, and Baywatch. And he has guest starred on a number of TV series, including Friends. For those who don’t recall, he was the blackjack dealer in Vegas during the show’s season five finale, who Joey believed was his “identical hand twin.”

Playing to this role, Matt LeBlanc looked at and felt three sets of hands poking out through a curtain to decide which one belonged to his true “hand twin.” After choosing the right one, Lennon poked his head out to say a quick hello.

He might be 80 years old, but that hasn’t stopped this character actor from showing up to revive his character of Mr. Heckles, the surly neighbor who was always angry about everything and at everyone.

RELATED: 5 Sitcoms Besides Friends We Want To See A Reunion Special For (& 5 We Don’t)

Hankin showed up in full bathrobe with the same sourpuss face fans came to know and love from him almost two decades ago. Hankin, by the way, hasn’t slowed down his acting career one bit: keen-eyed viewers might recognize him as the junkyard owner Old Joe from Breaking Bad and its sequel movie El Camino: A Breaking Bad Movie.

Host James Corden joked that only Justin Bieber could somehow make the iconic Spudnik Halloween costume Ross (David Schwimmer) wore in one of the many Halloween episodes look good. During a fashion show segment towards the end of the special that highlighted some of the most memorable looks from the show, the pop star strutted down the runway with the frumpy potato sack and satellite on his head as if he were wearing expensive designer clothing.

His confidence and rhythm while looking completely dorky and silly made it really tough not to laugh. It’s easy to see why Spudnik was easily the best costume ever on the show.

She’s a model as well as an actor and singer so it’s no surprise Cara Delevingne did a great job modeling not one but two hideous outfits from the show. The first was the bright pink bridesmaid dress Rachel was forced to wear in her friend’s wedding.

The second was another Ross Halloween “miss” costume, the Holiday Armadillo, which he created in an effort to help combine both the Christmas and Hannukah traditions.

What made Maggie Wheeler’s appearance so amazing was not just that she did the Janice voice that fans came to know and both love and despise at the same time (it can even be heard through internet memes!), but she also did that iconic laugh.

RELATED: Friends: 5 Season Ten Episodes To Watch Before The Reunion (5 To Skip)

It isn’t her actual laugh, but Wheeler revealed that it was playing opposite Matthew Perry as Chandler that made her come up with the laugh as a way to hide the real urge to laugh because he was so funny.

A huge surprise was when Cindy Crawford, modeling icon, showed up to model that famous Ross outfit that consisted of a black button-up shirt and extremely tight black leather pants. So tight, in fact, that Ross could not get them off.

Her appearance came just after a discussion about that very episode where LeBlanc praised David Schwimmer for his performance in scenes like that one, where his physical comedy was so well orchestrated. Naturally, Cindy walked the catwalk like a professional and the leather pants fit like a glove.

Many fans might have forgotten that Tom Selleck was on the show as Monica’s tall, handsome, and dapper boyfriend, Dr. Richard Burke. In fact, as Selleck reminded Courtney Cox when he popped in to read a trivia question, she left him for Chandler! While fans loved them together, the reality is that they were doomed from the start.

The fact that such an A-lister like Selleck made a quick appearance is a testament to the impact the series has had on pop culture. Selleck was in 10 episodes in total through the series run, from 1996 to 1997 and again in 2000.

One of the sweetest appearances was of Elliott Gould and Christina Pickles who played Mr. and Mrs. Geller, Ross and Monica’s parents, through the series’ run. They talked so nicely about their time on the show, including how welcome they felt every time they went on set to film scenes.

They also talked about how they truly worried about the cast at times as if they were their real parents, and spoke fondly of the many scenes they filmed and interactions with the cast.

It was a given that Lisa Kudrow would sit down at the remade Central Perk café with a guitar and sing “Smelly Cat.” A reunion show would not be the same if she didn’t. But what shocked and excited viewers was when Lady Gaga popped in and asked if she could sing along, too.

As they sang together, almost certain to spark a new set of Smelly Cat memes, a full choir appeared behind them. Combined with Gaga’s amazing voice, they made the song sound like a number-one chart-topping hit. This, of course, isn’t the first time a chart-topping musician has asked to perform the song with Kudrow. Back in 2015, she appeared on stage to sing the song with Taylor Swift at one of her concerts.

NEXT: Friends: 10 Saddest Things About The Gellers


Next
Friends: 10 Saddest Things About The Greens

A professional writer and editor with 18+ years of experience, Christine, now a freelance writer/editor, is a self-professed TV fanatic with tastes that vary considerably from comedies to dramas, sci-fi, and more. She can usually be found binging a new show at night, coupled with a glass of red wine. With a long history writing in the field of consumer tech, she now also writes on topics from entertainment to parenting, lifestyle, marketing, and business. She resides in Toronto, Ontario in Canada with her husband and young son.