Firefighters get a break, but danger still looms 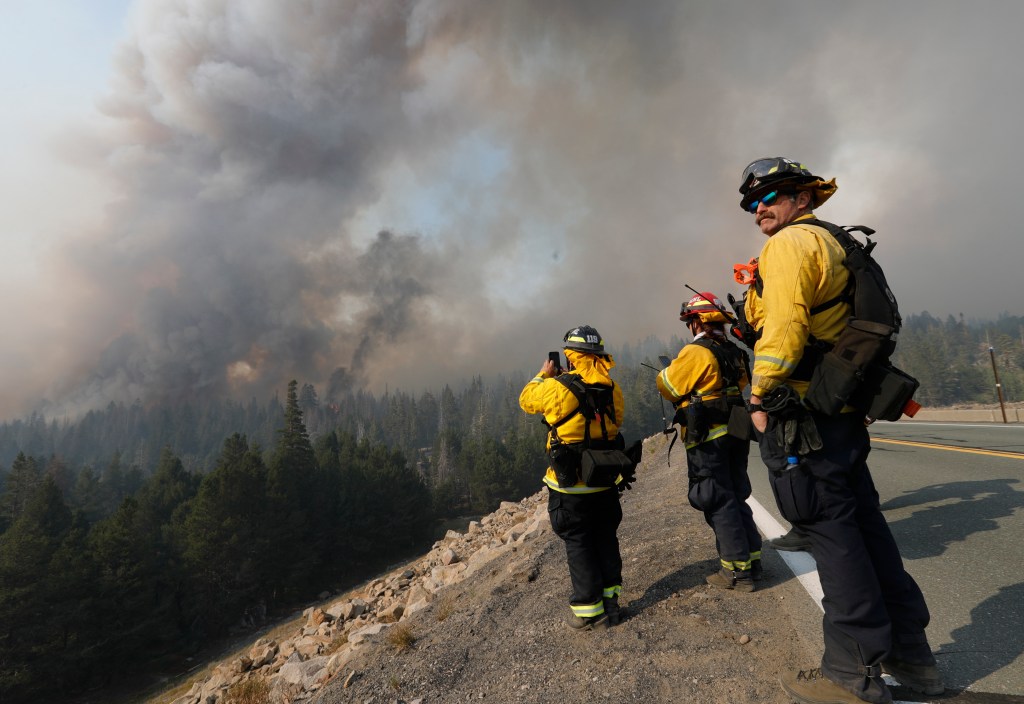 For the first time in days, the pace of the Caldor Fire’s growth slowed Thursday, giving firefighters a sense of cautious optimism even as they warned that the unpredictable blaze still threatens parts of California’s famed Tahoe Basin.

Winds over the next few days are expected to be mild, giving crews a chance to cut off the fire’s advance before it burns through another community. South Lake Tahoe so far has been spared — in part thanks to a lucky break in the weather, but it’s far too early for those on the front lines to feel a sense of relief.

The fire remains too close to the picturesque vacation destination for comfort.

“South Lake Tahoe dodged a bullet because the winds never materialized,” said Craig Clements, director of the Wildfire Interdisciplinary Research Center at San Jose State University. “But until it’s totally out, a big wind event could change conditions and cause problems.”

In more good news for Tahoe, the wind was expected to shift direction Thursday, blowing the fire south, away from the lake known for its crystal-clear waters and the surrounding communities, forests and renowned ski resorts.

“We’re feeling cautiously optimistic,” said Brian Newman, Cal Fire operations section chief. “We have a lot of resources, we’ve put a lot of control lines in, and we’re making a lot of good progress in and around the homes between Meyers and South Lake Tahoe, so we’re feeling more confident about that.”

As of Thursday, just two homes were damaged in Meyers, and no additional losses were reported in the Tahoe Basin since the flames blew over Echo Summit on Monday night.

One of the main priorities Thursday night was keeping the fire from reaching the Kirkwood Mountain Resort and its surrounding cabins. Snowmaking machines have been turned into firefighting tools at Kirkwood and at Heavenly Mountain Resort, pumping out water to soak buildings, ski lifts and forests.

One of the most active sections of the blaze is just north of Kirkwood and Highway 88. Flames there were spotting viciously throughout the day as helicopter and hand crews worked to knock down spot fires.

Just south of Christmas Valley, where firefighters succeeded in protecting most homes from the blaze, crews were lighting back burns and toppling trees to reduce the threat of dry fuels igniting if embers fall in the area.

“We’re taking advantage of good weather,” said Parker Wilbourn, the incident public information officer. “The winds dropped, and relative humidity and the overall temperatures have decreased, so that’s created a window for us to bolster our containment lines.”

But an ominous grayish haze consumed the sky in the Tahoe Basin — a clear indication that there is still much work to be done to contain the nearby flames. Small pieces of ash fell throughout the day, collecting like dust on windshields and porches. The area’s trademark beautiful blue skies, green forests and pristine alpine lake were cloaked under layers of smoke.

The eastern flank of the fire closest to South Lake Tahoe got uncomfortably close to neighborhoods off Pioneer Trail.

With more than 50,000 people in communities from Tahoma on the lake’s western shore through South Lake Tahoe and on into Nevada forced to evacuate, officials on the north side of the lake issued a message they never would under normal circumstances right before Labor Day weekend: Stay away.

Though a bit of blue sky was visible Thursday on the north side of the lake, the air remained smoky, key roads around the lake were closed, and most outdoor activities had shut down, said Andy Chapman, president and CEO of the Incline Village Crystal Bay Visitors Bureau. He urged visitors to stay home and clear the roads for emergency personnel.

“It’s certainly not the time to travel to Tahoe right now,” he said.

For Tim Owen, engine captain for the Eldorado National Forest, the destruction has hit close to home. His fire station for the past three years in Grizzly Flats burned down just a couple of days after the blaze erupted on August 14.

“It’s a long season, and we’ve got a long way to go,” he said from his post at the top of the Sierra House neighborhood off of Pioneer Trail. “But we’re doing what we can given what we’ve got.”

Officials don’t expect full containment of the fire until Sept. 13.

Ken Rush, a Cal Fire bulldozer operator out of Yreka, finished up a 24-hour shift Thursday morning after helping to establish an expansive bulldozer line from Highway 89 northeast to Heavenly Mountain Resort, clearing brush and trees 80 to 100 feet wide with the goal of slowing any flames before they would reach neighborhoods off of Pioneer Trail.

Rush, who has spent more than two decades fighting wildfires, came directly off of working 24 days at the Dixie Fire.

“I’m not gonna breathe a sigh of relief until it’s out.”